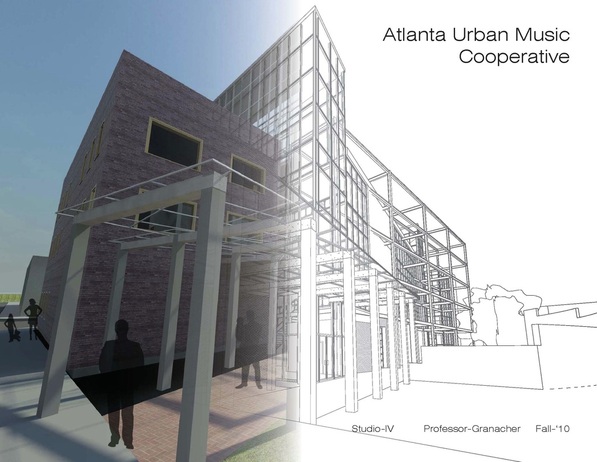 Premise-            The merging of Interstates 75 and 85 divided the historic Auburn Avenue neighborhood in
two distinct parts connected with a hugely unappealing under-bridge interstitial space.  The
neighborhood, with its ties to the civil rights movement, has one of the few strong small-
scale urban contexts still remaining in the sprawling metropolis of Atlanta.  The robust social and
cultural climate of this site make it an apt location for studying the impact of architecture
in the urban context.  Adjacent to the location of the first African-American owned and
operated radio station, the project will focus on the expression of music as an urban art form.

Description-       The project will incorporate a musical tradition of the area into a new facility for the
Atlanta Urban Music Collaborative- a non-profit for training youth in music performance,
recording, sound engineering, and broadcasting.  The collaborative will obtain funding
the market-appropriate recording facilities drawing large names in urban music.

The neighborhood, with its ties to the civil rights movement, has one of the few strong small scale urban contexts still remaining in the sprawling metropolis of Atlanta.  The building is situated on the same site as the historical Herndon Building which housed the first African American Radio Broadcast station.  In 2008, a horrific tornado went right through the heart of the site and destroyed the remains of the old Herndon building.  Presently, a portion of the building remains standing and will be used as historical context within the site.

When building components are added into the concept, it all sums to be a dynamic use of steel, glass, and solid walls.  Steel beams and columns are used to create pockets of TRANSPARENT windows.  Frosted and tinted glass create TRANSLUCENT layers within the building’s interior and exterior.  Brick, concrete, and steel stud walls trap creative sounds and minds within by building OPAQUE walls.